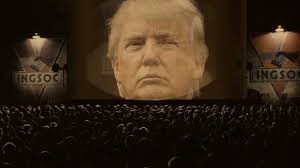 “Evil” is a loaded word. It’s a little like “Nazi” or comparing people to Hitler. Back when Donald Trump was sworn in — and some of us noticed how evil and Nazi-like Trump was already behaving — “Godwin’s Law” was invoked (Godwin’s Law says that “as an online discussion grows longer, the probability of a comparison involving Nazis or Hitler approaches 1”) to poo-poo any such comparisons. Donald Trump — per the news media — was just a “different kind of potus”. You know, the kind that doesn’t follow rules. Or the law. Or the Constitution.

Donald Trump is not a “different” kind of president, he’s a criminal. He’s a rapist and a thief and a money launderer and a traitor (not necessarily in that order). That’s all in the public record. It would be how we already think of Trump — except the news media keeps setting side all the details they learn about Trump in order to start each day’s reporting from that “he’s a different kind of potus” perch.

If Donald Trump walked into the house of each of those journalists who can’t put the proper names to Trump’s criminal, corrupt, treasonous behavior and deliberately infected them and their whole families, I bet those brave journalists would call out Trump for being not just evil but Evil. I guess once their families are in the game, shit gets too real. But what about other families?

Evil is evil is Evil. Raping women is evil. Donald Trump is a rapist. Money laundering is evil. Trump has laundered copious amounts of Russian mob money. Separating children from their parents and putting them in cages is evil. Trump has done that. Committing treason is evil — as is stealing an election (then trying to steal your re-election) and lying about a pandemic because it hurts your electoral chances.

Mitch McConnell — he’s evil, too. Where to begin?

Mitch’s pandemic relief proposal is designed to be too little to do anyone any good. Remember: it’s Mitch’s game plan to kill off any possibility of “socialized” government. Pandemic relief — to the RW money behind Mitch — is the same as UBI (universal basic income). That’s even worse than socialized medicine to these crony capitalists. As horrified as Mitch is by Nancy Pelosi’s $2.2 billion dollar demand for relief, he was even more horrified by Trump spitting and spewing how he wants to shell out way more (he’s at that desperate “buy all the votes you can!” place).

The point: Mitch isn’t negotiating. His starting point was meant as his end point — and he was reluctant to be that generous. By design, Mitch’s proposal won’t pay anyone nearly enough to stay home and wait out the pandemic (like most other countries have done). Like Trump, he’s happy with everyone rushing into the pandemic’s maw — so long as he gets to stay safely at home.

Quick reminder: In the leadup to election 2016, Mitch refused to let We The People in on the dirty secret that Russia was weighing in to the election, bent on making Trump president. It was Mitch who tossed aside the sanctions against Oleg Deripaska so he could score a $400 million Russian aluminum factory in Kentucky. Deripaska, remember, was sanctioned for his role in subverting the 2016 election.

Mitch McConnell is evil — with a turtle face.

The news media — and a few wavering Democrats — want Nancy Pelosi to compromise with Mitch and the Republicans. They want us to take Mitch’s bullshit proposal seriously. They want us to make a deal with bullshit. With evil bullshit.

The people urging compromise with evil have never been subjected to evil. Or, if they have, they’ve sold out as a response — hoping like hell that by selling out, they can avoid the slaughter. Like the Jewish capo’s who worked with the Germans in the Warsaw Ghetto — offering to fill the railroad cars bound for the camps themselves. These Judenrats — Jewish councils — did all of Hitler’s dirtiest work for him — and then got tossed onto the same pile of bodies anyway.

All compromise bought was a little time — at the expense of one’s soul.

It’d be like compromising with Donald Trump — and letting him inside your house to harangue you (while infecting you and your entire family).

Only a fool — or, apparently, an American journalist — would do such a thing.