If you want to have a shot at being a successful storyteller, you need to have a better grasp of how people actually tick than most other people.

Storytellers who don’t get human beings right are soon employed doing other things — storytelling being out of their range.

So storyteller HAVE TO get people right or they won’t be storytellers for long.

If you bore in on the PEOPLE in THIS story — who they really are, why they really do the awful things they do — it’s not hard at all to figure out what’s going on here.

Vladimir Putin isn’t a mystery.  He’s a professional spy — a SPY MASTER in fact, a conservative with a religious streak in him a mile wide.  What he WANTS isn’t a mystery either: He wants to restore Greater Russia to a place of ‘prominence’ and power.  Putin also wants more money (cos, apparently, he’s not nearly rich enough).

And Putin wants Russia to be a player.

Donald Trump isn’t a normal president, he’s an abomination.  He’s a liar.  He’s a TRAITOR and a thief.

As any storyteller will ‘tell you’ — real human beings almost never do whatever they do ‘just because’ or ‘for no reason’.  They may lie about why — even to themselves — but there is almost always a very real ‘WHY’ — and if you can bore down to that, you will understand virtually EVERYTHING there is TO understand about that character.

The natural progression from understanding how a character REALLY works is to see how they ACT & REACT while being part of a story.  Are they the protagonist or the antagonist?  Is the story theirs or someone else’s?  Or is this a story that will ‘become’ theirs as it gets told?

If the storyteller flubs any of those details, they’ll hear about it.  Audiences’s are just as attuned to how people really are as the storytellers; they want storytellers to remind them how people are, to reveal them in interesting new ways that play with storytelling conventions.  They want to see the world as they understand it — albeit with a few twists that expand their understanding of people and the world.

That’s what too many of our Journalists — storytellers all — continue to get terribly wrong.  They refuse to see all the characters in this piece for who they really are — falling into the trap of trying to describe non-normal characters in ‘normal’ terms instead.  The audience is starting to get antsy though…

We know the MSM storytellers are missing it right now.  They keep insisting on story elements and character details that just don’t ring true.  Because they don’t describe people (and characters) as we KNOW them.

The story of Donald Trump, the Republican Party & Election 2016 is only just beginning to get told correctly — with the perspective it demands.

Massive, Big stories are more complex, have more diverse characters with more diverse reasons for doing what they do.  It’s why hewing to storytelling basics are essential.  WHO are we talking about?  WHAT do they really want to accomplish within the context of both the larger story & the smaller one?  And, most importantly — WHY?

The Truth is, we already know WHY Donald Trump has done what he’s done.  He’s a narcissist and a fool.  He’s an egomaniac and a phony.  He’s a danger to everything we hold dear.

He’s the second worst thing to ever happen to America.  How he came to hold the reins of power in his tiny, orange hands — THAT’S the REAL story of our time…

Mountains impress.  They wow you with their existence, their enormity, their majesty, their size.  On the one hand you want to revere it like a sentient creature, on the other, you want to climb it — not so much to master it as just to look it directly in the eye.

Because mountains are so big, to climb them, you have to prepare — get in shape, get the right gear — and (here’s the really important part) CHOOSE A PATH.  With a lot of mountains, attacking it directly — climbing straight up — will not work out well (no matter how experienced you are and how much your equipment cost).

So, the experienced mountain climber — having considered all the climbing conditions (which means they’ve familiarized themselves with every bit of the mountain — top to bottom) — will scope out and then plan for a particular ‘line of attack’ that will get them to the top safely and efficiently.

And then there are ‘tourists’ who love to look at mountains from afar.  The view is incredible — ‘comprehensive’ and complete in that we ‘see’ the whole mountain.  We know its shape and size and general ‘affability’ in the sunlight.

It’s not.  The picture doesn’t tell you anything specifically about ALTITUDE other than there might be some.  If you’re there, ON the mountain?  That unseen force will dictate a lot of your feelings about the mountain.  Distances, too (from this distance) get distorted; a lateral move across the mountain’s face that looks ‘relatively straightforward’ from way, way, way back here is nowhere near that straightforward when you’re actually clinging to the mountain’s icy face… 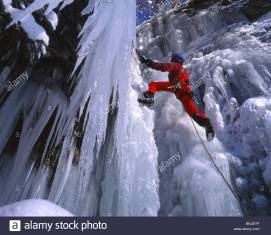 That wide shot of the mountain is lovely.  But it doesn’t actually convey a whole lot about the mountain.

The first time a story comes over you — over me anyway — there’s a rush of ‘awe’.  It is very much like the feeling I get when driving, say, up the PCH in Big Sur and you see THIS around every curve — 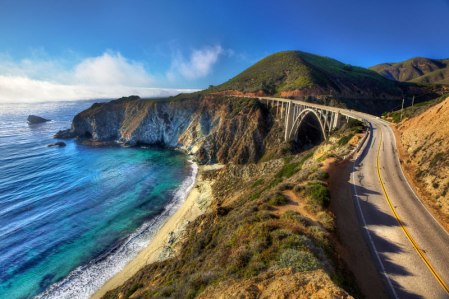 It can stagger you with its Big Picture Awesomeness.  And you could lose yourself forever in any number of its Small Picture Details.

But for all any story’s beauty — or absurdity — or tragedy — you cannot tell it from miles away.  You have to GET INSIDE IT in order to report it.  But (and here’s where the MSM falls down 90% of the time) — You have to report it from inside while always keeping THE WIDE SHOT in your mind’s eye.  You have to see every bit of detail in its larger context — The Big Picture.

And then you have to remind yourself constantly:  What COMPELLED you to tell THIS story in the first place?

When you find your way atop a story — when you look it in the eye and know you found the best possible way to ‘tell it’, there’s always one last challenge awaiting you…

How the hell do you get down?

I have a mixed marriage.  I am American and my wife is British (now also American).  My children are mixed – British & American Nationals.

And yet — I have always had reservations about doing such a thing — because, on some level, I feel like I would ‘become’ a little ‘less American’ in order to be ‘A Little Bit British’.

It’s crazy, I know.  Stupid and irrational.  But it’s there, in my gut — and I can deny it all I like but it’s there:  I AM AN AMERICAN THROUGH & THROUGH.

This country has ‘IMPRINTED’ something on me that I can only call ‘I’m An American’.  I take incredible pride (most of the time) in what that means (or SHOULD mean) to the rest of the world.  It is a vital part of how I define myself — to the World and to myself.  I start each day having certain UNALIENABLE RIGHTS because of where I was born, who I was born to and what Nationality THEY were.

Despite all the bullshit and nonsense that gets thrown at all Americans as they grow up in American Culture on their way to Becoming Full Fledged ‘Americans’, there IS a CORE CONCEPT that has become ‘The American Ideal’ — the conceptual BEACON whose radiance has attracted hopeful people for 240+ years:

If you are willing to work your ass off — and be a good citizen while doing it — America is THE place where ANYONE can ‘MAKE SOMETHING’ of themselves.

That is what has brought so many bright, talented, hopeful people from all over the World to this place.  THIS IS AMERICAN EXCEPTIONALISM.

It ain’t White Christian Men circle jerking each other — that’s for sure.

Now — full disclosure — I grew up upper middle class in an upper middle class (Jewish) suburb outside of Baltimore in the 60’s & 70’s.  I had a LOT more privilege than LOTS of other people.  I had advantages and opportunities they didn’t.  It was not a level playing field.  I know that and it disturbs me.

America always provided me with opportunity (with the occasional, unspoken ‘we’ve already allowed enough Jews in the door, can ya try again later maybe?’).  Every dream I ever imagined — provided I was willing to provide the Sweat Equity — had a reasonable chance at getting off the ground at least.  The fairness we aspire to has been slow to actually stand up on its own two feet.  It’s getting more help recently.  Lots more women to make SURE Fairness not only gets to stand up but gets to STAY up.

Wouldn’t it be awesome if ‘Fairness’ became a thing again.  How about ‘Fair’ Elections — radical notion, right?

‘FAIRNESS’ has always been pretty illusory in America.  It’s always depended where you stood as to whether ‘Fairness’ would come your way.  But I grew up believing that ‘Fairness’ actually existed in America — that it COULD exist here.  The more diverse America becomes, curiously, the more FAIR it becomes — and the more EXCEPTIONAL it becomes.

So, to me — FAIRNESS isn’t a thing unto itself, it is the BOTTOM LINE on which ALL THINGS REST.

Everyone gets a FAIR shot here.  Or no one does.  That’s what ‘America’ means to me.  It’s that simple.

As I witness the republican party urinating & defecating all over the very notion of ‘Fairness’, I mourn for a piece of us.  It never WAS capable of ‘Fairness’ and we were fooling ourselves that it ever was capable.  There’s something dark, nasty and — okay, EVIL — at America’s core.  It sits right beside everything that’s good.

It’s always been there, too.

But I also believe that ‘Fairness’ can overcome that, too.  Because ‘Fairness’ — when practiced — produces real, palpable results:  At the End of The Day, Everybody Wins.

And that, too, is how I think America is supposed to work…