American journalism has multiple issues that prevent it from doing its job correctly.  Corporatism’s up there but we can’t blame corporatism for ‘Both Sides Do It’.

I’m curious — Is ‘Both Sides Do It’ (the market version of ‘False Equivalence’) actually taught at American journalism schools?  Is that where the Chuck Todds & Alex Witts & Andrea Mitchells & Wolf Blitzers & Chris Cilizzas of the world learned to ditch all analytical thinking and simply assume that all things are indeed equal?  They certainly couldn’t have ‘learned’ that from actually studying reality.  Or living in it.

The first thing ditched when a journalist tacitly accepts that ‘both sides do it’ is PROPORTION.  They could (and the Chuck Todds ALWAYS DO) ask the dopey ‘what if’ — “Well, what if this otherwise completely illogical, unbelievable thing were true…?”  The next thing they do — if there’s a shred of similarity — is “See?  Both sides DO do it!”

Yeah, Chuck Todd, they do.  Hey — didja know that humans and fish both ‘breathe’?  They do!  Both sides DO IT!  Of course, humans breathe air and fish breathe water but — that’s a minor detail, right — at least it always is where your storytelling is concerned:  “BOTH SIDES DO IT!”.

If journalism is an inquiry into The Truth, then any journalist taking up the mantle that ‘Both Sides Do It’ has just cut their vision of The Truth in half.  Maybe more.

Any journalist even ‘thinking’ that ‘both sides do it’ is a journalist who’s already left the building.

Bad enough as ‘both sides do it’ is as an ‘analytical tool’, it’s a hell of a lot worse as a basis for action — as in ‘both sides do it so here’s what WE should do…’.  There’s nothing of substance where the ellipse now is.  You can’t take ‘both sides do it’ and create actions to stop both sides from doing it.  It’s a dead end description — in addition to being inaccurate.

The way it almost always works — no, ALWAYS works — is we all turn to Liberals, Progressives and Democrats to ‘be the adult’ and step back from the precipice first.  No one ever looks to conservatives to make the first move because they know — compromise is not in any conservative’s DNA.  There’s a reason they’re conservative:  They want to CONSERVE something — the past is my guess.

Every time they compromise though, a piece of that past gets wiped away forever.  It’s no more than a memory now… .  Conservatives know that.  Newt Gingrich did.

That’s why his revolution allowed no compromise.  Compromise wasn’t just failure, it was extinction.  In response, Newt launched the full-on Culture War that got conservatives so crazed they thought joining forces with RUSSIA was an okay idea.  They thought taking Russian money and serving Russian masters was preferable to compromising with progressives.

Which brings us to Mitch McConnell — the man who has single-handedly destroyed the US Senate — the man who stood in the way of Barrack Obama telling America in September that our election was under attack from Russia — whose aim was to make Donald Trump president. 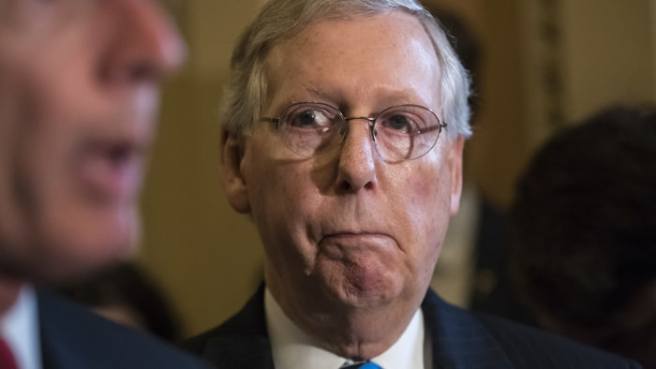 Mitch, it turns out, has been taking Russian money forever… As in MILLIONS of it.  And we thought he was only the Koch Brothers’ lackey… Silly us.  Mitch literally robbed Barrack Obama — AND EVERY AMERICAN WHO VOTED FOR HIM — of the SCOTUS pick THEIR VOTE WON THEM.

‘Won’ them.  Or is winning different when Democrats do it?