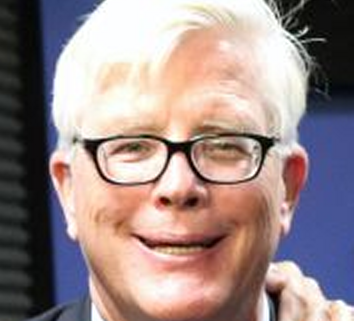 I am not a fan of Magical Thinking.  In the Pantheon of Bullshit — Religion (which is nothing BUT Magical Thinking) is King.  It snares you when you’re young and your mind is unformed — when Magic and Awe are natural — because, being young — YOU DON’T KNOW ANYTHING.

But, the theory is, as you live, the ‘Don’t Know Anything’ ledger goes down while the ‘Know A Few Things’ ledger rises.  Except religion — by design — inhibits that.  Religion marks off a whole big patch of ‘real estate’ for itself — ‘The Unknowable’ — and insists you buy into all of its ‘answers’ to those Big, Deep Questions.  Never mind the fact that its answers are based on nothing.  No data, no science, no research, no analysis — only feelings and the somewhat clever imaginings of completely UNINFORMED desert dwellers circa 3500 years ago.  You have to accept THE COMPLETE IGNORANCE OF FACTS as being ‘truer’ than FACTS.

Hugh Hewitt wears his Catholic School education on his forehead.  Nothing innately wrong with that — except Hugh shows evidence of being an All-In Believer.  He absolutely believes that a deity impregnated a girl with a man-god whose mission was to die for humanity’s sins — because ‘men’ were ‘guilty of original sin’ because EVE.  THAT is the BASIS for this man’s morality and belief system’.  Utter nonsense — stories that, perversely, DISTORT the very message the Hugh Hewitt’s of the world think they exemplify.

That’s like a Harry Potter devotee  imagining a whole religion based on all the characters in Harry Potter World — a fiction that’s based in part, on reality as we know it.  But that doesn’t make the story itself real.

And it doesn’t make the dopey shit you spew true just because the thoughts popped into your religion-addled brain.  It doesn’t — no mater how many times you say it.

But Hugh Hewitt — and those like him — DO believe the dopey shit that pops into their heads.  If Hugh were just some dithering parishioner who always collects the stray  prayer books and never forgets to complement Father Busy-hands  on his  incredible sermon last Sunday because given less than half a chance to be extra creepy?  Hugh’s taking it — to the bank.

A few weeks back, we got the perfect example of how Hugh ‘works’ and why it’s so goddamned dangerous.  The dam broke around Harvey Weinstein and all those women began to speak the Truth about what exactly Harvey had done to THEM.  Hugh got on the air shortly thereafter and announced — not a hint of irony or self-awareness within MILES — and said:  “I’ve listened to these women and their accusations — and I find them believable…”

Did you catch that?  Hugh said he listened to those women and HE decided that their stories were believable.  Oh Happy Fucking Day…

In Hugh’s mind — that really was significant.  He had given it some actual thought — and coupled it with his belief that nothing really means anything until he says they mean something.  That’s not hyperbole.  Hugh actually believes that he stands apart from your average person — that his Catholicism gives him special insight and special dispensation.

Hugh thinks his painfully Catholic education makes him a better judge of others than just about anyone else.  Because that’s what a lot of religious education teaches — that if you ACCEPT the prescribed OOGA-BOOGA — everything you say becomes automatically true — because OOGA-BOOGA.  And for a lazy-assed ‘thinker’ like Hugh Hewitt (and every lazy-assed religious thinker like him) — EASY is what you’re after because you just aren’t CAPABLE of any mental challenge harder than not breathing yourself to death.

I think MSNBC was stupid in the extreme to give Hugh a show.  They’re even stupider to ever put Hugh on their air.  It KILLS their integrity because HUGH HIMSELF HAS NONE.  Just curious, MSNBC — how big exactly IS the ‘Hugh Hewitt Fan Club’ that has you more afraid of losing a great journalist like JOAN WALSH rather than a republican camp follower and known Nixon Fluffer like Hugh Hewitt?

I have never not watched Hugh Hewitt without IMMEDIATELY thinking he was, without a doubt, THE DUMBEST MAN IN THE SOLAR SYSTEM.

I have never not shaken my head at the depths of his ignorance and the extent of his gullibility.

I would love to see a graphic posted by Hugh’s head whenever he’s on describing all the stupid shit he’s ever said and the percentage of times that stupid shit was wrong (pretty much 100% — guaranteed).

I would love to see Hugh ADMIT that he’s never right.  Oh, wait — Hugh’s Catholic, remember — the religion where a fallible guy can suddenly — BY MAGIC — become ‘infallible’.  Hugh believes shit five year olds throw off because — BECAUSE IT’S NOT CREDIBLE or LOGICAL.

The problems facing us are massive and potentially fatal.  The LAST thing on earth we need is advice from people whose whole belief system is based on bullshit.  Bullshit doesn’t get better, more productive or easier to live with the older it gets.  Guys like Hugh Hewitt EPITOMIZE Bullshit.  They epitomize the proliferation of Bullshit — because they are its most productive vectors.

Now, I bet , if I met him, I would probably find Hugh Hewitt a perfectly nice, civil, articulate companion.  But then he’d open his mouth — and he’d start talking.

And the honeymoon would be over.